The website Motorcycle Roads rates routes across the country and the Incredible North Shore Tour was rated number one in Minnesota. Those of us who spend a lot of time on the North Shore are not surprised. Between the soaring cliffs, smoked fish shops, unique artwork, and tree-lined winding beaches, it’s no wonder the North Shore beat out 20 other routes throughout the state.

Directions are simple, as you simply start in Duluth and take Highway 61 all the way up to the Canadian border. Here’s a brief rundown:

This city of 85,000 people is known for its trails, microbreweries, and motorcycle apparel company Aerostitch, which makes high end riding suits and other accessories. Visit their retail center at 8 South 18th Avenue West from 8 am to 6 pm Monday through Friday or 8 am to 2 pm Saturday (Saturdays are April to October only). Duluth also has a Harley-Davidson Sport Center, which is always worth a stop.

Our cabins just north of Duluth are a good place to spend the night on the way up or down the shore. Particularly if you’re from the Minneapolis-St. Paul area you may not want to cover the entire shore in a day. Drive-up Friday after work and relax with a fire, a couple of beers, and stunning views of the big lake. The next morning wake up to a phenomenal sunrise and get some coffee before heading on your way.

A quaint, old-fashioned small town with a nice walkable beach area. The beers from Castle Danger Brewery are worth stopping for and the breakfasts at the Vanilla Bean (cranberry wild rice pancakes! North woods porridge!) are too. Though both on the same stop might be a little heavy.

You’re actually passing by SIX state parks so consider this a stand-in for the others. The falls are tremendous and the hiking is great, but what makes these stops special are those helpful workers and plaques that can turn a “what the heck am I looking at” into a “here’s exactly what you’re looking at.”

I know we said Gooseberry stood in for all the state parks, but we have to mention that the lighthouse is incredible.

Now you’re getting into the hilly region. The views get stark here in the best way. You can almost feel the taconite oozing out of the ground. When you swoop by ore docks or through tunnels, as you will at various points on the route, you’re connecting to the area’s history.

If you haven’t been to Grand Marais, think of a cross between Portland and Alaska—a lot of arts and music, but a lot of guys who live in the woods and make snowshoes too. It’s a pretty neat way of life where old school ways of life meet new ideas about sustainable living and find that not a whole lot separates them. Artists’ Point and the North House Folk School are good places to get a feel for the town. Not interested in living in a yurt? Just enjoy a bite at World’s Best Doughnuts or Hughie’s Taco House and check out the shops downtown before hitting the road again.

Plan a stop at Grand Portage State Park to experience the highest falls in Minnesota.

If you bring your passport, you could really make this an adventure by checking out the sights in Thunder Bay. It’s a winding but pretty drive up the Canadian side of the lake. Thunder Bay is cleaning up its old image and becoming more international, but still has a “big pickup trucks and Finnish pancakes” flavor to it (aka not what you think of when you think of Canada).

Or just enjoy the far north feel. Something about international borders makes for a great sense of possibility and even in a country as big as ours, it’s nice to know we’ve still got neighbors. Turn around, head back (hopefully for a second night at Breezy Point) and enjoy the drive. 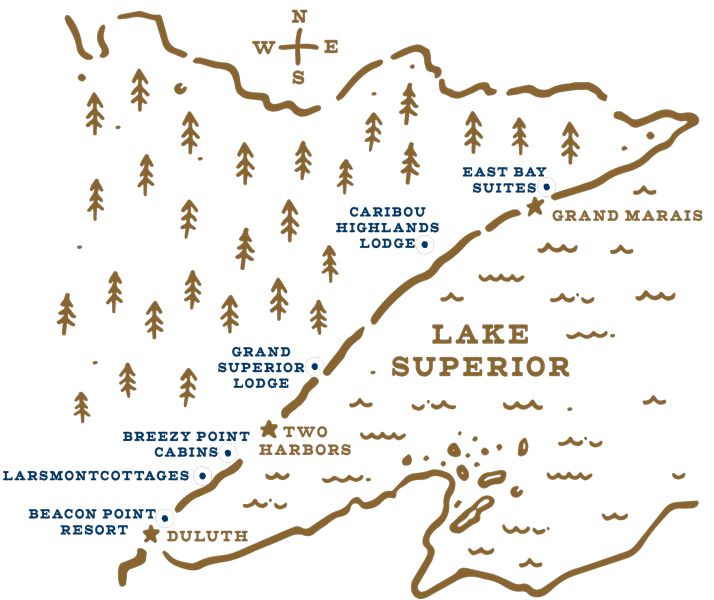